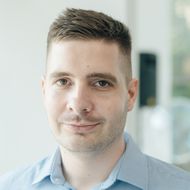 I graduated from the Economics Department of Singidunum University in Belgrade, Serbia, in 2017. After that, I spent some time working in the United States and China, and then I decided to come to Russia. I chose Russia because, I believe, 85% of Serbs love Russia, and each of us wants to come to Russia. I don’t feel like an alien or even a foreigner here.

I asked my friends from Russia about the best universities in the country, and they recommended HSE University as the best and most modern one

My friend also told me about a scholarship for studies in Russia, and I used this opportunity. When I came for the Prep Year, it was my first time in Russia. On the first day, I felt like I was in Shanghai. But then, I saw that Moscow is more beautiful than Shanghai, since it is older and has a lot of nice architecture. And now, I feel here like I feel in Belgrade. I was born in the west of Serbia, the city of Užice, but studied and worked in Belgrade for almost ten years. I think the process of adaptation in Russia took 15 days: I found some grocery shops where I could buy food, learned how to use the metro and how to get to the university, and after that, everything was easy.

I chose the Prep Year track in Humanities, which included Russian History, Social Studies, Russian Literature, Russian as a Foreign Language, and Russian for Subject-Specific Purposes. Studying was easy for me, because I had learned Russian history, literature and social studies before. Russian for Subject-Specific Purposes was difficult, because there are a lot of complicated words that I am going to use during my master’s studies.

The only difficulty I’ve faced in Russia is bureaucracy. Everything else has gone smoothly

Once a month, I participated in HSE’s Russian Speaking Club and enjoyed it.

I have already enrolled in a Master’s programme in International Relations. This programme has instruction in Russian and several courses taught in English. After graduation from my master’s programme, I would like to stay to work in Moscow.